On Saturday, April 27, 2013 in Chicago, Illinois the Nation’s top Show Choirs battled for the title of National Champion. Thirty choirs travelled from across the country to compete at the Arie Crown Theater at McCormick Place.

In the women’s division, Center Grove’s Debtones were named 3rd Runner Up and also received the caption award for Best Costumes. The Debtones entertained the large crowd with Never Close Our Eyes, Pretty Gorgeous, Home, Zing Went the Strings and the New York Megamix.  There were many different styles of shows at this national competition proving show choir has something for everyone. 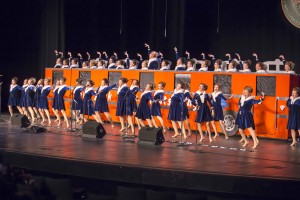 Center Grove’s CG Sound System’s lively show included Steal Your Rock & Roll, Never Met a Wolf Who Didn’t Love to Howl, Bella Notte, The Kings of Leisure and Make Me Happy. “Our students are the most driven, dedicated, and talented around and I’m proud of their performances during the FAME National Finals,” said director Jennifer Dice.  “They left it all out on the stage, and truly performed from the heart.  They have had a successful season, and should be very proud of their accomplishments. Their work ethic will serve them well in their future careers.”

The road to the National Show Choir Championship began with entry into one of five qualifying competitions held across the country in Hollywood, Branson, Chicago, Orlando, and New York City. These events are produced by the Nation’s leading Show Choir event producer, FAME Events, headquartered in Mesa, AZ.

The top three mixed finalists and the top two of the women’s division from each qualifying event were invited to the “National Show Choir Championship Finals” at the Arie Crown Theater in Chicago, Illinois on April 27.   The Center Grove Choirs qualified for the National competition at the FAME Regional in Chicago March 23.

Your last chance to see the Center Grove Choirs perform this year will be the Spring Spectacular on Thursday, May 9, 7 p.m. at the Center Grove High School Auditorium.  Tickets will be on sale in the main office May 6-9 and will also be available at the door. All questions should be directed to the Choral Music Box Office at (317) 881-0581 ext. 4100.