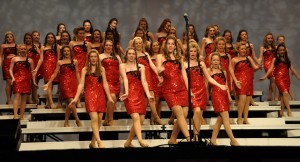 Accents were awarded the Grand Champion trophy in their first competition this year in the Unisex Festival Class. CG Singers and Surround Sound placed 3rd Runner Up in their divisions. All classes were challenging with numerous competitive choirs, but especially the Mixed Festival Class in which Surround Sound competed against twelve choirs.

In the solo competition, a very busy Joel Flynn captured the award for 1st Runner Up. He also competed as a member of Sound System and CG Singers.

The Center Grove choirs are directed by Christopher Pratt and Jennifer Dice, assisted by Sheila Leachman and choreographed by Andy Haines. The next completion event will be at Norwell High School on March 10. The next home event for all of the Center Grove Choirs is the Showcase of Champions at Center Grove High School March 22.