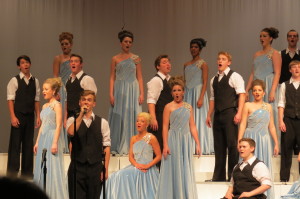 The Center Grove choirs are directed by Jennifer Dice and Jared Norman, choreographed by Andy Haines, assisted by Sheila Leachman and accompanied by Greg Sanders.  The next home show is the Madrigal Dinner Theater,  Fri. Dec 6 & Sat. Dec. 7 at 7pm and “A Country Christmas” Fri. Dec 13 at 7pm & Sat. Dec 14 at 2pm. On Friday, December 14,  the choirs will be joined by Another Round  (formally known as IU’s Straight No chaser).  Please visit www.centergrovechoirs.org for more information on the ticket sales for both of these events. These shows are perennial favorites and will sell out, so place your ticket order early!